Volunteers have important and diverse roles at U.S. Army Corps of Engineers lakes across the country.  Some serve as park hosts greeting and facilitating the stay of camping families, others staff visitor centers and run interpretive programming, some maintain park facilities, and much more. Kathy and Jack Duke began their volunteer service after discovering a potential equestrian trail at Bardwell Lake near Ennis, Texas.

In 2002 Kathy Duke was looking for some fresh air and began taking her lunches out at Bardwell Lake. An avid equestrian trail rider, Kathy wanted to know if she could ride her horse on the 2000+ acres of natural areas surrounding the lake. In the fall of 2002 Kathy emailed the U.S. Army Corps of Engineers, Fort Worth District to ask about equestrian opportunities at Bardwell Lake. She was surprised to receive a reply from a Bardwell Park Ranger, Thomas Eurke, stating "she needed the backing of a non-profit and a trail proposal before management would consider her request." She contacted the Director of Texas Equestrian Trail Riders Association, who she had been on a ride or two with and got them on board to back her. She drew up an eight page proposal outlining her plan and the support she would have from TETRA. Christmas Eve 2002 Kathy received a gift that would keep her busy for the next four years; the Corps partnered with TETRA and the Dukes to build a multi- use trail starting at the north end of Waxahachie Creek Park. 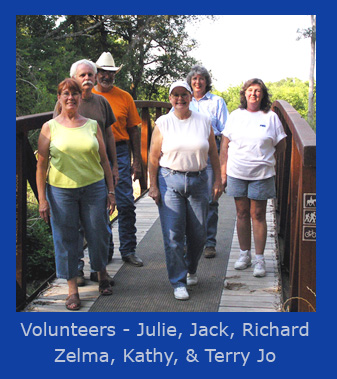 In April 2003, Kathy, Jack and a few trail riding friends set out on an old Ford tractor armed with weed-eaters, tree loppers and other hand tools to begin an adventure that continues today. The Dukeâ€™s have become the backbone of the Bardwell Lake Volunteer program.  They spend almost every weekend supervising other volunteers or working on the 22+ miles of trails they developed at Bardwell Lake. Their commitment and dedication goes well beyond the weekend work days. Kathy explains "it started as a selfish request to ride her horse it has transformed her life and the community she calls home." The excitement in her face, as she tells of the many thanks she receives from mountain bikers other horse riders and even local joggers, says it all. Kathy recently remarked, "the fact that all these people now have a place where they can enjoy their chosen sport, see butterflies, spring flowers and other natural wonders" is what keeps her going. And going they are! 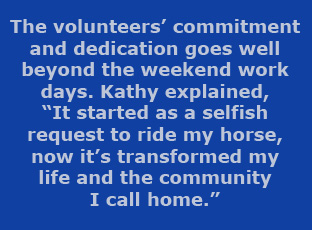 During the regular work week the Dukes work their regular jobs and spend their free time planning for the upcoming work days, recruiting new volunteers, meeting with Park Rangers about the next phase, soliciting donations of materials from local businesses and more. This self motivated couple has amazingly rallied the local community, businesses, and Texas Parks and Wildlife Department in support of their dream to have a trail they could ride close to home.

The first sections of the trail opened in September 2003 with the trail head parking and camping area open one year later. Since that time a core group of volunteers Terry Jo Parker, Zelma Wright, Sandy and Kenny Rudd, Butch and Char Anthony, Julie and Richard Garcia have put in between 250-500 or more hours each. Kathy and Jack Duke have put in well over 3000 hours of their own. Countless others have come out for a day or a weekend or two and the number of volunteer hours this project has received thus far is staggering. The financial and in kind support received from local businesses also stack up with Wal-Mart supporting the project with a $1000 civic grant, Advance Drainage Systems Inc. donating culvert piping for gully crossings, Home Depot giving the project numerous bags of cement, Maverick Metal Trading providing pipe rail for hitching posts, and Redwine Farms donating materials for rider mounting blocks. Individuals have contributed too.

One person with a tender heart for equestrian trail riding donated PVC piping for an extension of the water line required for the trail head parking and camp ground area. Many individuals are counted on for cash donations when supplies, tools or equipment are needed. State agencies became involved with a Texas Parks and Wildlife Department Recreational Trail Grant three year ago for $41,000.

When the trail reached the crossing at Waxahachie Creek, the Rotary Club of Ennis commemorated their 100th year anniversary by donating funds for a bridge, and by September 2005, the seventy foot bridge was in place. Through it all Kathy and Jack Duke were there organizing, supervising and ensuring it was up to the standards of the Corps.

The trail building continues with a recent gully crossing being placed this past spring giving access to the land between the gullies, and gates to be installed for access near Mustang Point, and signs for nature and historical interpretation are in the plans. In June 2006 the barn roof at Waxahachie Creek park trail head and camp ground was completed. Now, horses staying overnight have a stall with shade to call home while their riders sit back and relax in the breeze off Bardwell Lake, catch a gorgeous sunset, or watch as the stars come out.

As the trail building nears its finish the Dukeâ€™s look to the future and how to insure the trails' maintenance is kept up. They hope to establish a foundation that can receive donations and grant money that would support replacement of signs and equipment. For now Kathy and Jack along with Volunteer Coordinator Dorie Nicholson are just looking for people who want to spend time at Bardwell Lake, make a difference, and work as part of a team preserving the future of recreation and natural resources through volunteer stewardship. For more information on joining the Bardwell Lake Team please visit our website http://www.swf-wc.usace.army.mil/bardwell/

Those interested in volunteering at other Corps lakes or projects can visit the Volunteer Clearinghouse website at www.lrn.usace.army.mil/volunteer or call 1-800-VOL-TEER (1-800-865-8337).  The U.S. Army Corps of Engineers Volunteer Clearinghouse is a nationwide, toll-free hotline for individuals who are interested in volunteering with the Corps.  The Clearinghouse serves as a matchmaker, pairing up skilled, enthusiastic workers with Corps employees who can use their services, providing both with a memorable experience. 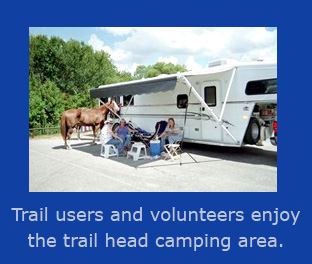 Reservations are available at Corps campgrounds nationwide through the National Recreation Reservation Service at 1-877-444-6777 or online at www.reserveusa.com

We are finally doing it! We found several jobs listed in the latest...