Workamper Journal by Arline Chandler. Photos provided by the Langers.

'We work for hats and tee-shirts," Jerry Langer said. He explained that, although they are not adverse to receiving wages, they basically are not Workamping to earn money. "We are lifelong learners and we seek positions that utilize the skills and talents we honed in traditional jobs. We look for a reason to be in places we want to explore. And we like the idea of giving back to federal lands such as the Bureau of Land Management (BLM) and U.S. Fish and Wildlife Services."

For Nancy and Jerry Langer, volunteering is second nature. While raising five children, each worked with Boy Scouts or Girl Scouts. Nancy was a Big Sister and served as a trustee at a Community College. She is certified in Red Cross Standard First Aid, cardiopulmonary resuscitation (CPR), and automated external defibrillator (AED) for the Professional Rescuer. Jerry volunteered on the fire department in their hometown, Rochester, New York. The former social studies teacher and the 19-year employee at Eastman Kodak Company, respectively, naturally incorporated volunteerism into their RVing lifestyle.

The Langers prefer to work together outdoors, acting as caretakers, fixing and repairing things. Nancy likes to patch a roof or paint a windowsill over sitting behind a desk.

Initially, Jerry and Nancy worked for a private RV park in Helena, Montana. Next, they traveled south to Utah and learned the basics of boondocking. They installed solar panels on their rig, which came in handy on a two-month stint at Owl Canyon Campground on BLM land near Barstow, California. 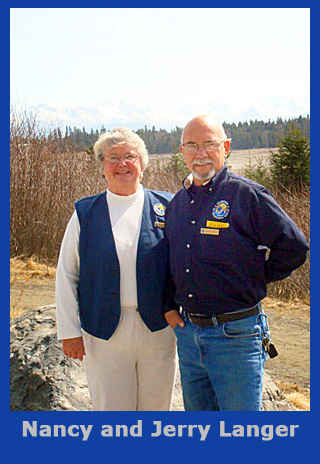 The Langers managed on their solar power and water from a single spigot in the center of the primitive campground. On shopping trips for supplies, they filled a six gallon canister of water to pour into the tanks of their motorhome. With the BLM staff, they took trail breaking excursions near Death Valley and toured the Goldstone Tracking Station at Fort Irwin.

"We met incredible people," Nancy said. "Travelers from British Columbia stopped overnight at this campground as they headed to Mexico for the winter. And we'll never forget the resident dog, Hobo, who had learned to survive in the desert by digging the rocks out of dry waterfalls for his drinking water." 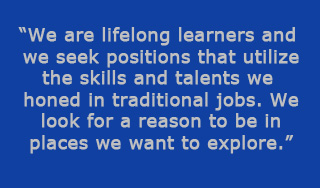 "The Sanctuary is a tourist place," Jerry said. "One quarter of the acreage is open and tour buses from the valley drive onto the ridges so people can see the horses."

Nancy says that for a $750 fee, Dayton Hyde personally takes three people on a day trip to the interior of the sanctuary. "We couldn't spend that kind of money," she said. "One day, our supervisor said, 'Dayton wants you to go and fix a gate so they can corral some of the horses that have strayed onto other ranches.'"

With the elder Mr. Hyde at the wheel, Jerry and Nancy excitedly climbed into his truck for their adventure. "We used binoculars to spot the wayward horses," Nancy said. "Jerry fixed the gate and Mr. Hyde called the neighboring ranchers to start herding the horses back onto his property. We circled around in the truck, and the horses converged through the gate. We were privileged to see that back country - something that would not have happened if we had not volunteered."

One season, the Langers took a paying job at Gray's Homestead Camping at Booth Bay Harbor in Maine. The campground had mostly repeat business at its island location. Nancy worked at registration in the office while Jerry did outside maintenance. On Wednesday evenings, he steamed lobsters for the campers. During off time, they explored Booth Bay Harbor in their kayaks.

Experiences are their goal. They once volunteered at Camas National Wildlife Refuge near Idaho Falls, Idaho. On short assignments, they assisted Passport in Time at Coronado National Forest in Arizona, where they did historic site care-taking, maintenance, and group camp monitoring. They participated with a group in a major historic site restoration, which included adobe stabilization and repair, roofing, masonry, and archeological survey.

On two occasions, the Langers worked at Crescent Beach and RV Park in Port Angeles, Washington. "In 2002, we were looking for a spot for the winter before heading to Alaska," Nancy said. "The Strait of Juan De Fuca is mild. We were located on the Strait one-half mile from the beach with the ocean in front of us and the snow-covered Olympic Mountains behind us. Without Workamping, we could never afford to live on property with such views! We traded duties for our site and hookups, mainly answering the phone, which they had installed in our motorhome for three months. The owners asked us back to bridge the seasons and we returned for a month in 2006." 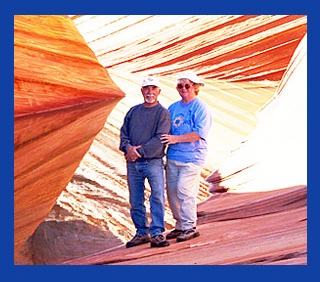 "We like talking to people and learning new information," Jerry said. "So we enjoyed volunteering as tram drivers and interpreters at Santa Ana - and also as interpreters of nesting shore birds at Yaquina Head Lighthouse on the Oregon Coast."

"In Oregon, we worked from a viewing platform near the historic old lighthouse," Nancy said. "The staff gave us scopes and binoculars and we told people about the habits of 50,000 nesting common murres. Someone showed us how to do digiscoping, combining scopes and a digital camera. We showed visitors. Through the lens, they could bring the birds up close enough to count their feathers!"

On more than one assignment, Jerry and Nancy volunteered at the Buenos Aires National Wildlife Refuge in Arizona. In 2008, they were caretakers, living in Harm House, a dwelling built by a wildlife artist who sold his property to the government. From January through April, they lived in the house located four miles from the main road in Brown Canyon. "As incongruous to Arizona as it sounds, Brown Canyon is a treasure, located facing the last sky island before the desert starts," Nancy said. "Waterfalls flow year-round and the canyon is forested with pine trees and cacti growing side-by-side. Wild flowers and animals abound. From the Education Center, visitors can take guided hikes twice monthly. Jerry and I met these groups at the gate and took them into the canyon.

"While living in the house, we patched the roof and did other maintenance." she continued. "Caretaking is our favorite kind of work. We left our motorhome hooked up at the Education Center where other volunteers reside, thinking we'd return often for potlucks and card games. However, we didnâ€™t leave the canyon as much as we'd thought."

Jerry and Nancy have volunteered twice in Alaska, first for Alaska State Parks, serving for two months as camp hosts at Ninilchik Scenic Overlook Campground, located near Soldotna on the Kenai Peninsula. In mid-July, they moved to Denali View North Campground, a parking lot with hookups, but a full view of the great mountain whenever she peeked from the clouds.

"We stayed until Labor Day, which gave us the opportunity to see the Northern Lights," Nancy said. "I often knocked on camper doors, giving 'wake-up' calls to folks who wanted to get up to see the display.

"Once travelers on bicycles from New Zealand came to Denali View North in the rain," she continued. "We invited them to get under our awning, and then we prepared a meal for them. Meeting interesting people is one of our perks in this lifestyle."

Currently, the Langers are volunteering at Islands & Ocean Visitor Center in Homer, Alaska. The Visitor Center is part of the Alaska Maritime National Wildlife Refuge and the Kachemak Bay Research Reserve. Both the Refuge and the Reserve commit to inform and educate the public about the national treasures of the ocean and the islands. One of the center's exhibits immerses guests in the sights, sounds, and smells of life in a remote seabird colony in the heart of the Alaska Maritime National Wildlife Refuge.

Upon their arrival in mid-April, Nancy and Jerry took more CPR and first aid training. They also took a tour of the Refuge ship, which takes folks out to the Aleutian Islands for summer studies. When Nancy talks about individuals doing three-month nesting sea bird studies from the ship, she laments, "If only I was 30 years younger!"

However, she looks forward to a nine-hour ferry ride to Kodiak Island as another part of their training. The four-day trip is one of many perks the Langers have enjoyed while volunteering, often experiencing places and scenes that are unavailable to the general public.

What can top a summer in Homer, Alaska? With their closet packed with tee-shirts and hats, Jerry and Nancy Langer look ahead for their next adventure - and more of those volunteer experiences reserved for Workampers.

What an amazing, personal follow-up it is for you all to send a hand-...