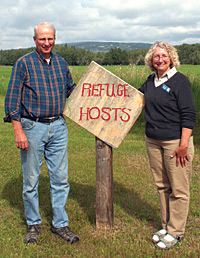 Soon after his departure for southern states, Ruth Ann began receiving photos on e-mail of live oaks, cabbage palms, and a canopy walk above the trees. Never having ventured far from her North Woods home, she replied that explanations of the photographs would be nice. Phone calls followed.

A light bulb moment occurred one spring day when Ruth Ann heard the roar of the ocean as Cliff stood knee deep in the surf and she looked out her window at a howling blizzard. In a moment of jealous anger, she pictured Cliff kicking warm waves while she trudged through snow.

When Cliff returned to Tomahawk, Wisconsin for the summer, a romance blossomed. He quickly proposed, but Ruth Ann knew that he had built his retirement on the RVing lifestyle. She thought she would like living on the road, but she suggested a trial run before she committed. After a week, she was hooked and the wedding was set for August.

“Fulltime RVing is a simple way to live, free of trappings,” she says, noting that they have four years of marriage—and four years of volunteering—in their history as a couple.

When they planned their trip to Alaska in the summer of 2006, seeking a volunteer assignment came natural. “However, we didn’t want to stay in one place for the entire summer,” Cliff says. “We subscribed to Workamper News, and also went online to seek volunteer opportunities at the State Parks and on BLM properties. We found the position at Creamer’s Field Migratory Wildlife Refuge on the Alaska State Parks web site.”

The Andersons prepared a resume and sent it to the volunteer coordinator, who ultimately distributed it to various parks. Mark Ross, manager at Creamer’s Field phoned, offering the volunteer positions for the month of June. Their commitment required them to be on the property by May 24, ready for the Memorial Day weekend.

Creamer’s Field, once a thriving dairy in Fairbanks, is home to diverse animals, but plays a special role in the habitat of migratory birds. Canada geese, pintails and golden plovers stay for a short time to feed and rest in the spring and fall. Other birds such as sandhill cranes, shovelers, and mallards remain the whole summer. During her month’s stay on the grounds of the old dairy, Ruth Ann became accustomed to the raucous calls of the mother sandhills to their young.

Working Saturdays, Sundays, and Mondays each week, Ruth Ann manned the Visitor Center in the dairy’s old farmhouse, a home to the dairy’s owners, Charles and Anna Creamer. Cliff worked outside, mowing, fixing and repairing the facilities. For their services, they were provided a full-hookup site on the old farm property with the huge white dairy barn and rolling green meadows creating a peaceful backdrop for their temporary home. Complimentary tickets to two of Fairbanks’ premier attractions, Riverboat Discovery and El Dorado Gold Mine, were additional benefits of their volunteer positions.

“On days off, we gallivanted, taking in as much of Fairbanks and the surrounding area as we could in a month,” Cliff says. They toured Pioneer Park and the Museum of the North at the University of Alaska, and took fishing trips to Quartz Lake and Manley Hot Springs. Avid fishermen, the Andersons carry a portable boat on top of their trailer. One day, they traveled to Denali National Park.

Although Cliff and Ruth Ann live full-time in their fifth-wheel, they maintain a home base in Wisconsin—a spot to plug in, a house they rent, and a storage shed full of clothing and all kinds of “stuff” that they admit they have not seen in three years.

“We don’t need it,” Ruth Ann says, describing how they clapped in glee when one of her recently married sons backed up a truck and carted away some of the furniture. “In our fifth-wheel, our wardrobe can be only so big. We’ve learned we can manage with smaller and less. When we live in the state parks in Florida during the winters, we only go to town once a week to shop. Our lives now revolve around the wonderful sights we see and the incredible people we meet.” 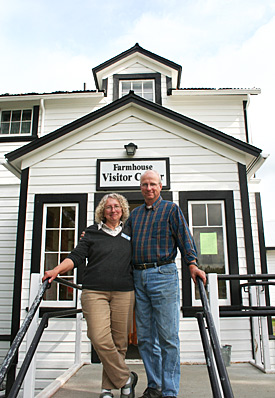 Ruth Ann, an upholsterer by trade, carries with her a portable industrial sewing machine, which she uses in her volunteer assignments at Florida State Parks. She often recovers truck and boat seats for park personnel. One season, she made cushions for Cedar Key Museum State Park. At Kissimmee Prairie State Park, a 54,000-acre preserve staffed by only three rangers, Cliff built new kiosks for informational displays and brochure boxes.

“The kiosks look like a 8-foot wide open building with a truss roof,” he describes. “Sliding Plexiglas fronts the bulletin boards, making the changing displays accessible. Upon completion, I drew a plan and sent it to the State Parks Department. My design is used for kiosks in other parks."

Cliff notes that funding is limited in all state parks. Staffing is typically inadequate to fill all the jobs. He estimates that in Florida, volunteers fill one-third to one-half the person hours. The parks require 20 hours of work per person in exchange for their site and hookups. Cliff says they willingly put in hours above the minimum, trying to visit and work in several parks during a season, and add at least one new location each year.

“We enjoy the visitors, other volunteers, and the staff,” Ruth Ann says. “We do all the things that RVers do in campgrounds—potluck, sit around a campfire, and enjoy our natural surroundings. I’ve fallen in love with Florida’s nature.”

“Ruth Ann and I are not opposed to camp hosting,” Cliff adds. “However, we’re more ‘fix and repair’ kind of people.”

One winter at Myakka River State Park, Cliff helped other volunteers put in nine designated volunteer sites with gravel pads, water, sewer, and electric. At Cedar Key Scrub, minimally staffed with a manager and one ranger, Ruth Ann and Cliff rearranged the workshop and put up handicap railings. Additionally, Cliff assisted in bird counting surveys once a week.

“We also went out to ‘mop up’ a prescribed burn,” Ruth Ann recalls. “We had a truck with a water tank and we put out hot spots. I’ve never been so dirty—nor had so much fun.”

The Andersons throw themselves wholeheartedly into their RVing lifestyle. “Combining volunteerism with travel is a good mix for us,” Cliff states. “We’re sharing our skills, yet not working full-time."

“Our only downside is squeezing into our retirement the huge choices of places to visit and the abundance of things to do,” he sums up.

I'm so pleased with the amount of information you share so freely....